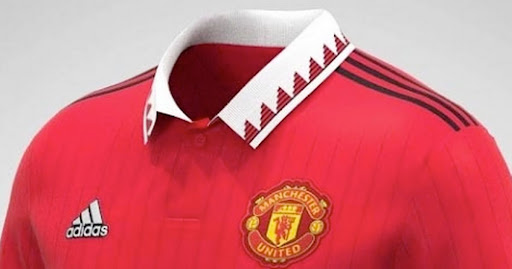 Ferguson assembled a squad full of immense talent to win six league titles during that decade, despite Arsenal, Newcastle and Blackburn also competing. Also during that time, United often wore kits with collars and smart embroidery on – as a reflection of that time period. When you think of players such as Eric Cantona, Steve Bruce and Bryan Robson, it’s hard for those jerseys not to come to mind.


So with the new strip appearing to leak online, courtesy of Jersey Review, it’s time to look at the three best things about it. United haven’t had a jersey sport a raised collar since the 2010/2011 season, when they had the likes of Wayne Rooney, Dimitar Berbatov and Nani at their disposal. This design shows it has the club’s white and black colours and it certainly looks pretty impressive.

And it certainly evokes memories of the 2006/2007 campaign, when they dethroned Chelsea as Premier League champions. United saw Rooney and Cristiano Ronaldo dazzle that year, with the duo stepping up to fire the club to title glory.

And the Red Devils will be hoping for a similarly successful season when Ten Hag takes over. That will be a big ask, with Manchester City and Liverpool dominating. But stranger things have certainly happened in football in the past…

United have become accustomed to being known as a team who play in red and white. But black has also been a prominent colour on their kits in the past and, on the same jersey as the white, it makes the home shirt look presentable.